The 'Day of Fire' never ended in the Amazon 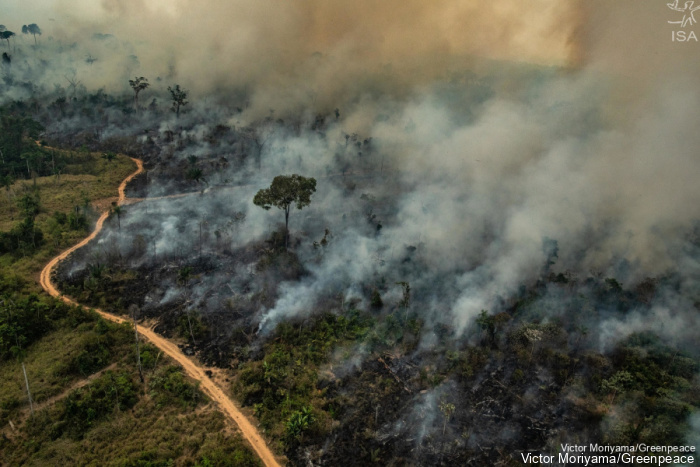 Fire has been used as a structural tool to exploit the Legal Amazon by the Bolsonaro administration. Annually, fires destroy thousands of hectares in the Amazon during the dry season; however, during the first two years of the current administration, these figures have taken on larger proportions.

Most of the fire outbreaks are criminally set and designed to remove native vegetation to facilitate encroachment by wildcat mining and, then, agriculture.

In 2019, during the first year of the Jair Bolsonaro administration, fires in the Amazon made headlines in newspapers around the world. It was the start of recent international pressure to protect the Amazon.

On August 10 of that year, a series of coordinated forest fires in the region of Novo Progresso (PA) resulted in, over the course of one day, a 300% spike in hotspots, according to the National Institute for Space Research (Inpe). Days later, smoke arrived in the city of São Paulo, over 2,000 km away, transforming day into night.

In the last two years, the rise in deforestation and fires after the criminal episode known as the “Day of Fire,” indicates that fateful day never actually ended. This was demonstrated by analysis conducted using the Alerts+ Panel, a new monitoring tool from Instituto Socioambiental (ISA).

In the Pará municipalities of Altamira, Novo Progresso and São Félix do Xingu, where most of the fires from August 2019 were concentrated, deforestation warnings from the Deter System (Inpe), recorded in the months preceding (April to June) the period of the 2020 fires, showed increases of 71%, 31% and 63%, respectively, compared to the same period in 2019.

In other words, after the "Day of Fire," the level of destruction did not change.

If the fires weren’t already frightening enough in 2019, with the increase in deforestation, the municipalities of Altamira, Novo Progresso and São Félix do Xingu recorded even more alarming fire rates of 48%, 15% and 60%, respectively, in 2020, according to VIIRS sensor (NASA).

And, in 2021, deforestation continued at high rates in these municipalities, foreshadowing a scenario that could be as bad as or worse than 2019. In Novo Progresso, deforestation in the months preceding (April to June) the dry season rose by 91% in comparison to the same period in 2020.

In Altamira, the deforestation rate is near that of 2019, with an increase of 2%, while São Félix do Xingu experienced a decrease of 7%.

From April to June of this year, deforestation in the three cities totaled the equivalent of 9,516 football fields per day, which represents the removal of almost 340,000 mature trees daily during three consecutive months, according to data from the Alerts+ Panel.

It is important to remember that the deforestation done three months previous to the fire season becomes fuel and increases the potential of the fires.

Ane Alencar, science director at the Amazon Environmental Research Institute (IPAM), says that the fires are generally a strategy for massive deforestation, used constantly by criminals. “The key point here is that looking at fires is not enough, we have to look at the deforestation as well,” she explained.

This year, according to the researcher, the data show that deforestation is growing, which could produce a new and unfortunate record for fires in the Amazon.

“May (2021) saw the most deforestation in the history of Deter. There was around 4,700, 4,800 square kilometers more than in the first seven months of the year for 2019 and 2020. In other words, there was a new level of deforestation in this period, which indicates that the area that was cut down will burn,” said Alencar.

Two years after the “Day of Fire,” fires break annual records. In 2020, the highest rate of the last nine years (150,783 hotspots) in the Legal Amazon, 20% higher than the previous year and 18% higher than the last five years.

In 2021, with an increase of 29% in deforestation in the first months of the year, and a forecast for the driest winter in the region, the fire season could be even worse.

In parallel, the dismantling of environmental protection agencies and mechanisms continues at full steam. Two casualties in the Annual Budget Bill (PLOA), in 2021, draw particular attention.

First, the program “Conservation and Sustainable Use of Biodiversity and Natural Resources,” under the auspices of the Chico Mendes Institute for Biodiversity Conservation (ICMBio), lost R$33 million in funding, compared to PLOA 2020.

Second, the extinction, in 2021, of the program “Prevention and Control of Deforestation and Fires in the Biomes.” In other words, the funding to prevent and control deforestation and fires in Brazil, for the entire year of 2021, was drastically reduced.

In the same sense, Bill 6.289/2019, a new edition of Bill 7.422/2014, shelved in January 2019, sponsored by then federal deputy and today President Jair Bolsonaro, established that the military police of the states would join the National Environmental System (Sisnama), an arrangement between federal, state and municipal environmental agencies created in 1981 by the National Policy on the Environment.

Only members of Sisnama can issue environmental fines and licenses, inspect and embargo rural properties, manage conservation units and control pollution, among other activities.

While staffing and expenses with the military agencies expand, ICMBio threatens to close its fire brigades due to insufficient and even further reduced budgeting for its activities.

Now, just before the “fire season” in the Amazon, only R$2.6 million has been set aside for the monitoring of deforestation and fires throughout the country, which is a 60.5% decrease in relation to 2011 and 17.5% less than 2020. The reduction was identified on the website for the Integrated Planning and Budgeting System (SIOP) of the federal government.

Antonio Oviedo, a researcher for ISA’s Monitoring Program explains that, despite the considerable pressure on protected areas, the scenario is even more devastating in areas that are not subject to protection mechanisms. Which makes the protection, surveillance and inspection of protected areas even more urgent.

“The current dismantling of agencies and environmental control policies and a discourse attacking the credibility of the institutions responsible for monitoring and inspection jeopardize our capacity to overcome environmental crimes. Delays in validating the Rural Environmental Land Registry (CAR) and the abandonment of inspections on public land of undetermined use, for example, contribute to a scenario of high rates of deforestation and fires that threaten the protected areas even more,” he said.

The Alerts+ Panel is a rapid response tool for quantifying data and statistics inside and outside the protected areas. It is updated daily.

The alerts are obtained from different sources (Inpe, Imazon, Nasa and Servir Amazônia) and can be classified using different criteria, in accordance with the search: specifying the type of alert, the region and the spatial overlay.

The platform analyzes the changes in the forest coverage, with downloadable maps, charts and files.