Virtual reality documentary 'Forest Makers' to be premiered at COP26 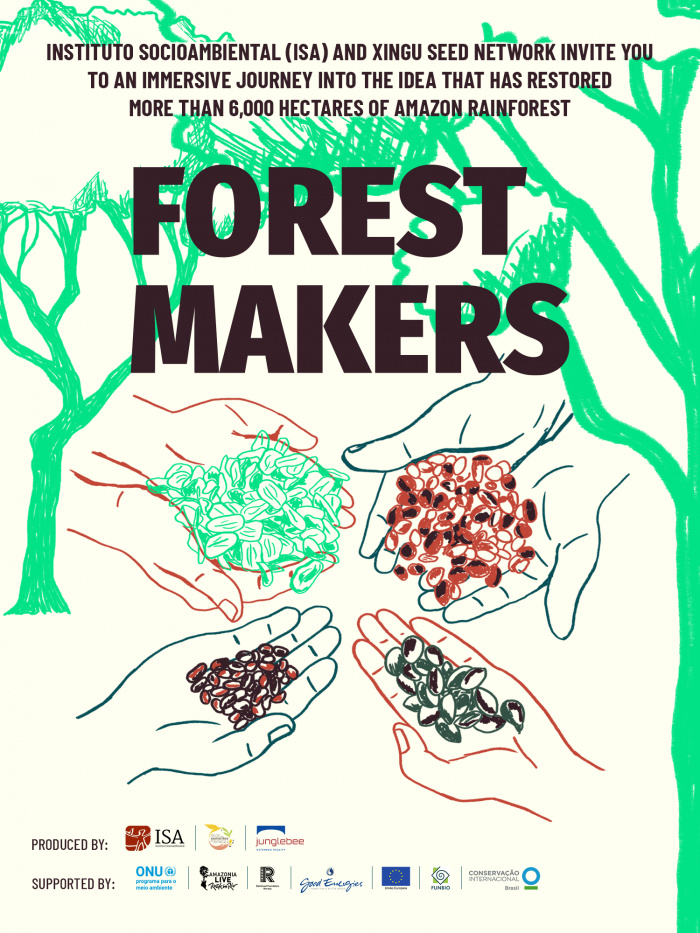 Bringing together environmentalists, local communities, and farmers to restore tropical forests seems like an improbable dream, but it is one of the most innovative and effective strategies for regenerating Brazil's forests.

The film "Forest Makers" is an immersion in the experience of Instituto Socioambiental (ISA) and the Xingu Seed Network, a group of people who have joined forces to restore degraded areas in the Xingu and Araguaia River watersheds in the state of Mato Grosso.

The international launching of the film will take place in two moments during the COP26, the main UN conference on climate change that takes place from October 31st to November 12th in Glasgow, Scotland. At the Brazil Climate Action HUB, on November10, at 2 pm (local time), and at the People's Summit, on November 8, at 6:30 pm.

The screenings will be followed by debates with the presence of Paloma Costa, member of the Youth Advisory Group on Climate Change, formed by the UN Secretary-General and ISA advisor, Beptuk Metuktire, young leader of the Kayapo people, in Mato Grosso, and Ana Castro, Head of Social Impact and Mobilization of Flow Impact, the film's distributor.

In addition, the film was selected to be shown at Surround Vision, a prominent area of the conference dedicated to screening social impact films produced in Virtual Reality. The curator brings together productions from different countries that showcase people and organizations that have found solutions to contain the climate crisis.

Narrated by Milene Alves, one of the more than 500 seed collectors spread throughout the region, the film shows up close the activities carried out by the Xingu Seeds Network and its partners from ISA who plant the trees and monitor their growth. They already number almost 20 million.

In nine minutes, the documentary also shows how groups with distinct interests manage to dialogue and unite to plant the forests of the future.

"Not protecting the headwaters and riverbank areas poses a risk not only to the forest, but also to agriculture and cattle-raising. Having the forest back is good for everyone," explains Milene during the film's narration while introducing the audience to how the Seed Network actually operates.

For more than 14 years, the network has been combining indigenous knowledge and cutting-edge agricultural technology to bring biodiversity and water back to the region and promote the local economy.

Based on the collection of native seeds, the network moves a socio-economic chain that rescues the culture, boosts the socio-environmental balance, and improves the well-being of local residents.

By 2020, around 260 tons of seeds from more than 220 native species will have been collected, generating an income of R$ 4.4 million (US$ 800.000) for local communities. This strategy becomes even more powerful when rural producers recognize that traditional knowledge and technology work in their favor and help restore forests that benefit the rainfall regime throughout the country.

Based on the partnership among several groups, ISA in together with Xingu Seed Network has already restored 6,600 hectares of native forest in the region.

"Planting forests brings people together. The act of collecting seeds, mixing them, preparing the mixed batches called muvucas, and putting them in the ground creates a fundamental link with life. In a context of climate emergency and pandemic, we are talking about the inspiration for a better future," says Rodrigo Junqueira, ISA's executive secretary

"Forest Makers" is directed by Tadeu Jungle and produced by Junglebee in partnership with the ISA and the Xingu Seed Network.

"A virtual reality experience provides a dive into the ideas that can help us transform our reality. It's a way of bringing this day-to-day life and the solutions found by the 'Forest Makers' to everyone," says Tadeu Jungle, the film's director and founding partner of Junglebee.

The film is scheduled for official release in November 2021, in a distribution and articulation effort led by Flow Impact. "Forest Makers" has institutional support from the United Nations Environment Programme, UNEP, and the UN Decade of Ecosystem Restoration. The Decade aims to inspire and support governments, multilateral organizations, civil society, private sector companies, youth, women's groups, indigenous peoples, farmers, local communities, and individuals from all over the world to collaborate, develop, and catalyze restoration initiatives worldwide.

ISA is a Brazilian non-profit civil society organization established in 1994 to provide integrated solutions to social and environmental issues, primarily focusing on the defense of social, collective, and diffuse rights and assets related to the environment, cultural heritage, and the rights of individuals and peoples.

About the Rede Sementes do Xingu

The Xingu Seed Network is a non-governmental, non-profit association considered the most prominent native seed network in Brazil. Created in 2007, the initiative aims at valuing the people and communities that collect seeds for forest regeneration in several territories in the watersheds of the Xingu and Araguaia rivers in Mato Grosso. There are currently more than 500 seed collectors who have already helped to plant nearly 20 million trees.

Based on the perception that some changes need to be accelerated, the Flow distribution company was established, a Maria Farinha Filmes spin-off that experiments with new approaches to reach the audience and carries out social impact campaigns that provide solid and plural pathways, fostering the activist spirit. Just a few of the highlights in their portfolio are the documentaries "The Judge," Oscar-nominated in 2019, and "Far from the Tree" (2018), which was named after the best-selling book - both of which are the result of a partnership with Participant Media, an American production company dedicated to making entertainment that brings social awareness, nominated for 73 Oscars and winner of 18 statuettes.